Dog Costume ... The making of a Head

If you've a really good memory you might remember that I've been making a mascot costume of a dog - it has been an on-going project that really did take far longer than I had planned ...

It is now finished :-)  and I thought you might like to see some progress pictures of the most difficult part of this costume - the head.   Back at the end of last year I posted about the cardboard mock-up.  This (sort of) became the pattern. 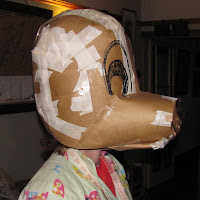 But as with all engineering projects - you have to start with some foundations !   In this case a hard-hat - the harness inside fits the wearer's head, the brim will support the dog's nose, it is firm and you can glue things to it.  Things like supporting foam structures and wires for the ears.  Reminded me of "My Favourite Martian" - Ooops that's aged me ! 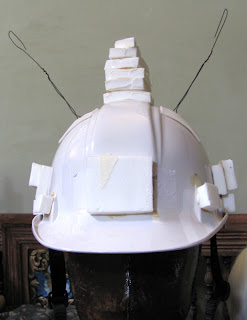 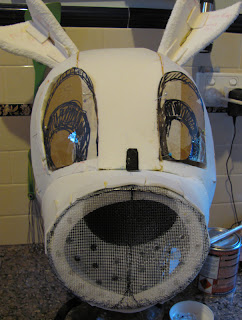 But here the head is taking shape - head, nose, lower half of the ears - all done.  Here I was checking that the end of the snout would work.

That wire nose / muzzle is the only place the wearer will be able to see through.  It is important to give the wearer as much 'sight' (and ventilation) as possible without making it too obvious that there is a person inside the animal.

And yes, I was using my kitchen bench as the work area - managed not to poison anyone!

The next step was the lower jaw, and I'm starting to work with the covering fabrics.   This is a jaw - hardly any of that pretty pink satin will show - but it needs to be there.

And here is the jaw glued and stitched in place - and some fleecy on the nose as well ... pins keeping everything in place while the glue dries. 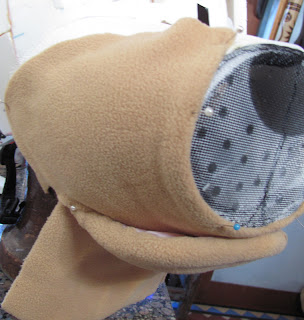 OK - now for the rest of the nose - a bit of artistic drapery here as this hound dog has jowls.  That's the original drawing of the Doggy - he is quite a cartoon type character. 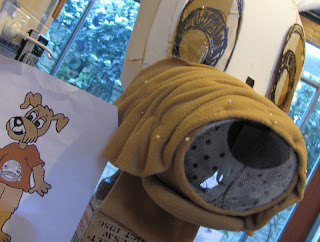 Nose done - next the ears.  Tried to make them floppy and there is a little movement to the upper halves of the ears when the wearer moves. 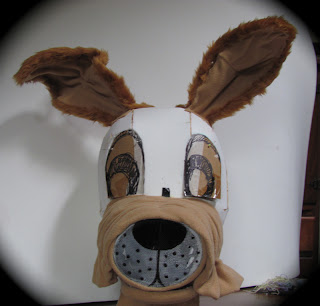 Skipping a bit now - here most of the fur is on and I'm checking that the 'cape' will work.  The cape is to cover the neck, it will go under the shirt. 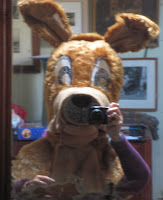 Intervening processes :
But you have probably noticed - dog still has cardboard eyes.  I left them to the end because they really had to be 'right'.  "The eyes are the windows to the soul" they say and definitely for an over-sized animal costume the eyes could make the difference between a nice friendly doggy and a really scary wolf-creature. 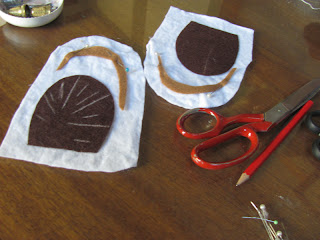 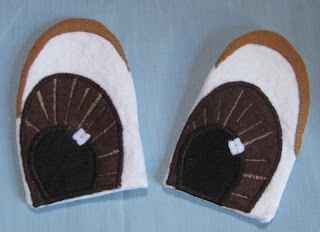 Eyes finished - felt and satin, machine and hand applique / embroidery.  He has a bit of a "twinkle" in his eyes.


Another little touch ... doggy needed something between his ears :-)   a bit of a "hair do".    In the photo in the mirror above, there is a mess of fur fabric where the front meets the back - a problem that needed a nice solution.

Once again I had trouble sourcing suitable fur fabric - I just couldn't find that "hair of the dog" [sorry!]  Eventually I bought a shaggy fur cushion and chopped it up!

I think the result is cute - 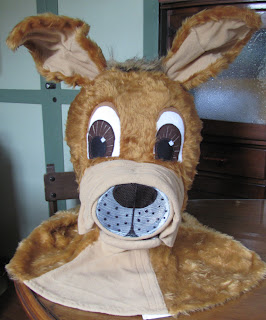 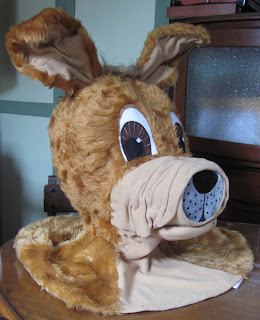 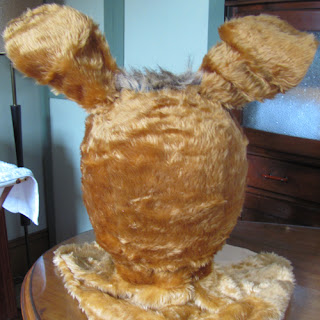 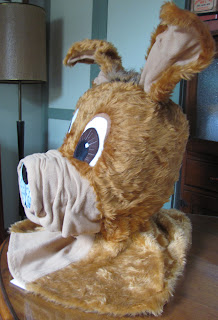 Oh dear - we've had some wet, grey, windy weather in the last few weeks so here is something to cheer you up : 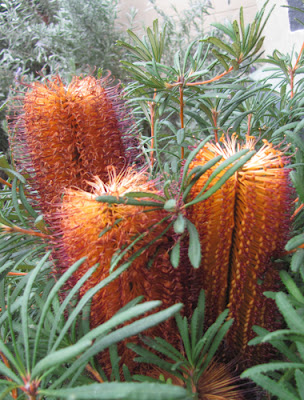 Don't you love those darker whiskers against the golden orange 'brush' - the flower on the right is very fresh and still has lots of yellow pollen on.

In our teeny - weeny front garden this prostrate banksia or Callistemon has been slowly establishing itself for many years ... I can't remember when we planted it and I've lost the tag and so I'm not even sure what sort it is, though I think it is a "stumpy gold"  which isn't a nice name but is a variant of the "hairpin" banksia or B. spinulosa.  I could be wrong though.

It is "vertically challenged" and slow growing (at least in our garden!)  but this autumn it has flowered magnificently with 15 big and gorgeous 'candles'.  It really looks quite wonderful and the birds think so too, those flowers are full of nectar! 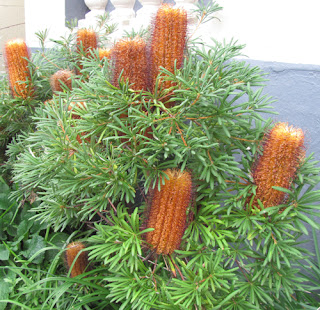 Well we've been back over a month now but I'm still in mourning :-/  it was a lovely holiday - what isn't there to love about France in the spring-time!

Naturally I did some knitting - can't go anywhere without a suitcase full of knitting projects.  This sock was mostly knitted in Belgium - 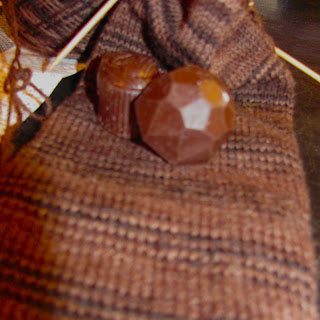 Appropriate given it's colour and those famously yummy Belgium chocolates :-)
I finished it in Versailles - also appropriate because of the amount of walking we did about the palace gardens and grounds ... Marie Antoinette's impossibly cute 'hamlet' ... the Petit and Grand Trianons ... 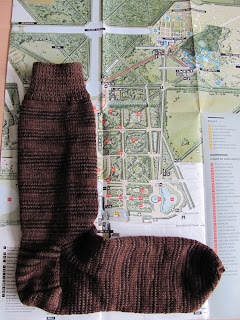 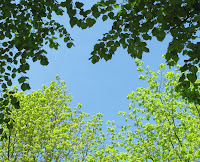 The colours of spring in Europe are lovely - and reflected in the clothing worn by many women and children (must be sub-conscious) !   Soft greens, aqua, clear jade, teal colours, apple greens ... the colours of all those new fresh leaves against the freshly washed sky ...

I found those colours in some yarn in the wonderful haby shop in our favourite town in Burgundy - Avallon.
Luckily, one of my daughter's friends is expecting her 2nd bub which provided the excuse I needed to buy it - bought a pattern & the needles ... 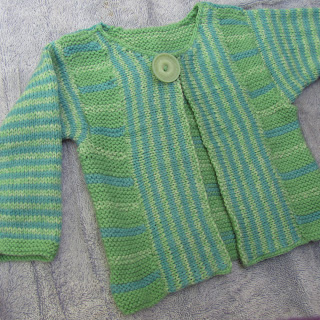 Really European style with all those stripes. 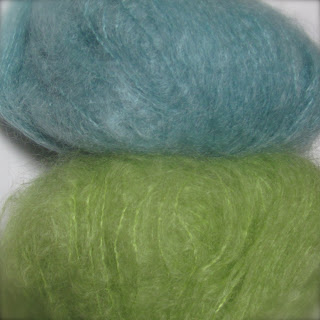 I think I was somewhat obsessed by those colours - bought this deliciously fluffy mohair in Vezelay -
I bought it from the breeder  :-)  she showed me photos of the goats and everything ... very lovely.
My 2 Blythe Dolls came with us!!   and I did some knitting for them too ...  Lillian needed a chic Parisian dress ... classic, understated elegance - 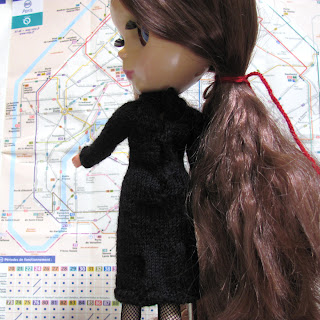 figure hugging with 2 little 'Dior pleats' at the back (a bit hard to see in the black yarn) -
Audrey asked for a similar dress - but with bracelet length sleeves and a frilly hem "like the dress in "Breakfast at Tiffany's", the one that other Audrey wears with the big hat" ... 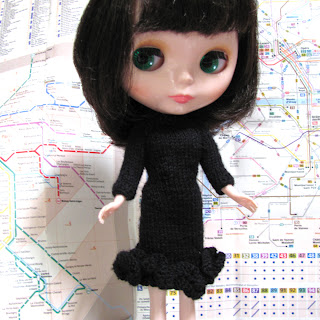 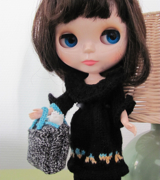 We all did lots of shopping in France and the Blythe Dolls needed a new bag!
I met up with a lovely group of knitters in Paris - a knitting group I met on Ravelry .  Despite my appalling lack of French they were very welcoming and sweet.  As a group they had been knitting shawls and were having a Shawl Fashion Parade in the Palais-Royale.  I took this shawl project but I'd only just started.  I'm not entirely happy with this and it will probably get un-knitted ... not sure about the yarn - I love purple, I love green but I don't love the way they are mixing here. 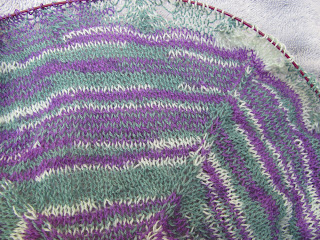 The Blythe Dolls have a New Sofa

Lillian & Audrey have been busy dictating another post on their holiday blog.

They are now relaxing with a well deserved cuppa and enjoying their lovely new sofa. 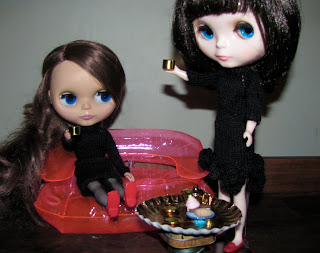 It's a perfect colour and very comfy!
Posted by Lillian & Audrey at 01:14 No comments: