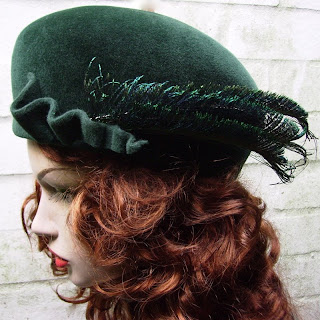 I've been forced to admit that yes, I do have too many hats. So, to make room for the new hats that I'll be making this year in the Millinery class I'm selling some - mostly in the Etsy shop though the cheaper ones will also be listed on ArtFire.

But having great photos is very important when you are selling on-line and hats don't seem to sell unless they are shown on a head, with hair etc. This was a problem until I realised that although her eyes have fallen in (and now rattle about in her elongated neck) Linda the half-a-mannequin would make a great hat model. I'm not sure where our daughter found Linda but she has had a few adventures while she has been with us including several strange hair-dos and some interesting make-up. Well we've scrubbed her up, repainted her make-up and today I bought her some new hair (the previous wig had faded and was almost green). It is only a cheap joke-shop wig and a bit shiny but it is long, wavy and a nice red/brown.

Here she is modelling a green felt that I made some years ago. I love this one but I never did get around to sewing an outfit to go with it. Strange but perhaps because most hats shadow the face and Linda has extremely long, camel-like eyelashes you really can't see that she has no eyes! I thought she'd have to wear sunglasses.

Have finished the throw and I love it - half wishing I could keep it. It is really big and I still have enough yarn left over to make one of my Berets :-) plus the pink colourway yarns that were swapped !

Millinery class yesterday - had brain-strain from all the patternmaking and I can't make the Marlene Dietrich hat for this exercise - does not fit the criteria. Want to stick to making 30's 40's inspired hats this year and I have found a hat design that will fit the bill - basically a cloche with a very strange tip (top bit) based on a hat from the early 1930s. We think of the flapper cloche as belonging to the 1920s but the cloche was fashionable well into the 30s.

ON SALE - I've been doing quite well on Etsy this month - and to keep things going I've put some items on Sale - check out both my Etsy and ArtFire shops for some Bargains !
Posted by Lillian & Audrey at 09:47 No comments:

The Fedora is finished and photographed and for sale on my etsy shop - here.
I think it looks pretty good, even on Linda the mannequin (poor dear, her eyes fell into her head some years ago) and I got my darling to model as well, just to prove that the hat is suitable for a bloke.
Posted by Lillian & Audrey at 16:08 No comments: 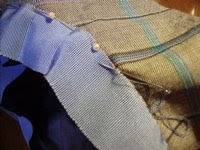 Am doing the Cert 4 Millinery course at TAFE this year and the first 'exercise' was to make a pattern for a fabric Fedora. The streets are awash with fabric Fedoras at the moment but I decided to sew my pattern up in good fabric and I'll be selling it on my Etsy shop.

I'm rather chuffed with it - got a nice shape to the crown complete with those dimples in the front (stitched in place with sneaky stitches inside). Here is a pic of one of the final processes - hand stitching the inside head-band in place - traditional gros-grain ribbon moulded by hand for a good snug fit on the head.
Posted by Lillian & Audrey at 17:52 No comments:

emb Blythe,
originally uploaded by lyndell23.
Also for granddaughter is the current sewing project - 1950's pattern, dress, bonnet and bloomers. Found some 'winsella' weave cotton at Spotlight (Rockdale) in mint green and off-white, the dress & sun-bonnet are embroidered with daisy flowers, lots of lace and really pretty. The bloomers will have frills across the behind. So far I've almost finished the flowers on the bonnet, using dull blues and greens and making bullion stitch 'grubs' for petals & leaves. This will give the embroidery a heavier, more vintage look than if I used 'lazy-daisy' stitches - but it takes much longer to work.
Posted by Lillian & Audrey at 13:52 No comments:

columbine,
originally uploaded by lyndell23.
The jacket is in Bendigo Woollen Mills 8ply 'Colonial' wool - a tweed of mauve & pink called "Columbine". I'm adapting a Sirdar pattern making it quite retro with Moss Stitch (aka Seed St) borders.
Posted by Lillian & Audrey at 13:51 No comments:

colinette throw,
originally uploaded by lyndell23.
The throw is to be a wedding gift and is the first time in almost 30yrs of knitting that I bought a kit! A Perugino throw kit, in the "capuccino" colour-way. Well the colours were really pink - utterly gorgeous but not suitable for the couple getting hitched. The kit had 6 hanks of yarn, 4 in 'sunset' (the gorgeous pinks) 1 in a blue grey & 1 in 'caramel' which is a mix of colours, mostly blues and gold/tan. So after much debate I got 3 more hanks of 'caramel' and have swapped them for the 'sunset' pinks. The result is still gorgeous (anything you do with Colinette yarn is bound to be gorgeous) and, as a bonus, I have some lovely pink Colinette yarn with which to make something else ... ah but what?
Posted by Lillian & Audrey at 13:50 No comments:

This will be a Blog of creations - what I am currently working on, or have just finished making.

I always have a number of knitting projects on the go - currently the needles are clicking on a throw of gorgeous Colinette yarns and a jacket for my granddaughter, she's almost 2mths old :-)
Posted by Lillian & Audrey at 12:56