Part 3 -  D to H of this alphabetical list;  An attempt at a cradle-to-grave, un-biased evaluation of most of the fibres used in our clothing & crafting.
Firstly to repeat a couple of important things (for more, see parts 1 & 2):
1.  When it comes to clothing - it isn't easy being green ...
2.  A great deal of the environmental impact of our clothing lies with the end user - that's you & me.  The person who buys, wears, washes, irons (?) mends, re-purposes, and ultimately decides when and how that garment is disposed of.

Listing is alphabetical and it'll go over several posts
I will update it as I discover more information
I'm Australian so the info is sometimes Ozzie-centric
I knit a lot (so I'll look at fibres often made into yarns but perhaps not so often found in commercial clothing)
I've tried to cover all aspects 'from cradle to grave'.

Dacron - see Nylon later in this on-going list, when I get to the letter N


Elastane / Spandex / Lycra - this is the stuff that makes stretch fabrics stretchy and about 80% of new clothing contains elastane threads - it is in:

Without elastic and elastic threads we would have underwear that buttoned on or laced up - I don't think we want to return to that but let's look at what all this stretchy stuff is.

What is it? -  Good ole' Wikipedia tells us that it is a "polyester-polyurethane copolymer ... invented in 1958 by ... Joseph Shivers at DuPont "  so obviously man-made and basically a plastic.  The word 'plastic' is a great catch-all for non-chemists like myself but most plastics are derived from petrochemicals and most don't biodegrade or they do so very slowly or they break down into tiny - micro - bits of plastic.  Unfortunately, most commonly used plastics are also unstable ... so although they sit about for ages in land-fill and our oceans they often don't last very well fulfilling the original purpose for which they were made.  I'm thinking here of those early Barbie dolls that go all sticky and disintegrate, all the plastic kitchen bowls that have cracked with use ... and of course, all those bits of elastic in clothing that stopped being elastic.

How should we look after it? - The elastane threads are usually woven or knitted with other fibres but it is often the elastane that 'goes' first and our stretch-wear stops 'returning' after being stretched.  To keep elastane and elastics being elastic:


What happens when it does go into land-fill? - I suspect that as with a lot of plastics, those elastic threads break into tiny little bits, still there but hard to see.

Flax - see Linen later on in this alphabetical list

Hemp - Yes, we are talking about cannabis but the plants used for their fibre have been bred to be low in THC ... so smoking a hemp T-shirt is quite pointless !!


What is it?  Hemp fibre has been used to make fabric and paper for thousands of years.  It is easy and very fast to grow, the fibres are long and thus very strong, hemp fibres don't stretch readily so hemp fabric holds its shape and hemp is naturally mold & rot resistant.

Hemp fabric was traditionally used when strength & durability were required - sails were made of it and the word 'canvas' comes from 'cannabis'.  During the Californian gold-rush, the miners needed trousers that were tough - the story goes that Levi Strauss started providing them with trousers made from light weight canvas ... made of hemp fibre ... the first 'jeans'.

Producing / Growing it - Industrial hemp grows easily to a height of 4m, it likes warmth and good soil (but needs less fertiliser than corn) hemp doesn't need pesticides or herbicides (hemp is planted quite densely so it'll out-compete any weeds).  A hemp crop requires about 14 times less water than cotton.  Industrial hemp captures large quantities of carbon and the plants mature in 3 to 4 months.  "Hemp benefits crops grown after it ... high weed suppression, soil loosening by the large hemp root system and the positive effect on soil ... it can also be grown several years in a row in the same fields"    (all this info from Wikipedia)

France produces more that 70% of the world's hemp fibre.

Processing it - There are some lovely words in the processing of hemp and other plant fibres ... after harvesting the hemp is retted then there is scrutching and something called a decorticator.
Retting uses water to dissolve or rot away cells and pectins surrounding the bast fibres ... hemp can be 'dew retted' by simply leaving it to lie in the field for a few weeks, or it can be 'tank retted' in concrete vats, this takes 4 to 6 days and the waste water can be used as liquid fertiliser.
Scrutching is breaking of the retted 'straw' (the stems) to further separate those desirable bast fibres from the woody core ...
I took these photos in the Museum of Popular Tradition in Offida, Italy - please excuse the quality, this was a small crowded room and this Gramola was long, being made from the trunk of a tree ... 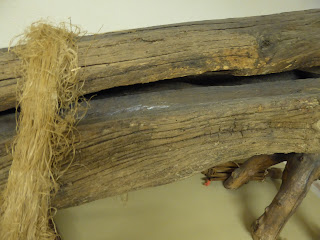 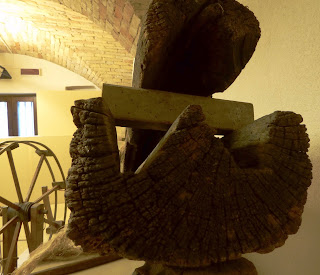 But you can see rather clearly how it worked ... personally, I'd not want to get my arm in there!  Not sure if that fibre draped over it is hemp or a raffia - it was a bit long to be flax but the spinning wheel is the sort used for spinning flax.

The Retting and Scrutching processes are basically the same for Hemp fibre and Flax.

A decorticator is a mechanical scrutcher - that breaks the stem and does the separation as well.  There are different types of decorticators for other fibres and for different grains, nuts and wood - but it seems that the first decorticator was made for hemp - in 1861 by a farmer from Bologna -  only he called it a "scavezzatrice".

From there the hemp fibre can be spun much the same as flax / linen ... indeed all the non-industrial photographic references I can find (such as that postcard from 'picturesque Auvergne') show the same arrangements for distaff, drop spindle or spinning wheel for flax and for hemp.

Other Thoughts - All parts of the industrial hemp plant is useful - the fibre makes great rope and paper, the inner core can be used to strengthen building materials and plastic car panels, it can be used as insulation, animal bedding and as a biofuel, the oily seeds can be used medicinally, as animal and bird feed, in cosmetics and paints.   75 to 90% of all paper was made with hemp fiber until 1883 and it is ideal for paper-making; it grows much faster than trees, the fiber is longer & stronger, it is naturally cream coloured and low in lignin - so requires far fewer nasty chemicals to process and the resulting paper doesn't yellow and is much stronger than paper made from trees.

Caring for Hemp clothing - Hemp fabric is strong and durable, it is absorbent and is actually stronger wet than dry.  It handles extreme washing temperatures and hot ironing, but bleaching can damage hemp.  It is naturally mothproof.  On a personal note - my hubby darling's hemp T-shirts last a great deal longer than the cotton ones.

Burning and Biodegrading - Hemp fibre burns and biodegrades just like all the other plant based fibres.