I've been asked for photos of my Major Work costume - the costume I made as my final project for the Tafe Diploma of Costume course in 2006. I can see lots of faults in this costume now but I'm still quite proud of it all. It represents over 6mths work and now lives in a large box, so any excuse ...

"A Seaside Toilette ... Summer is come and the graceful mondaine quits the delights of the town for the invigorating breezes wafted over the sunlit water ... her gown is of the simplest, {eh!} fashioned exquisitely by Worth ..." btw mondaine = a woman of the world - intelligence, sophistication & beauty.

The costume I made was "as historically accurate as possible" - and here it is worn by my lovely model, Karen. 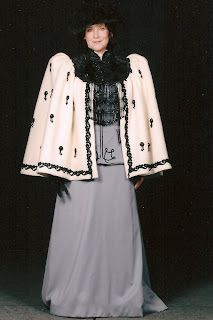 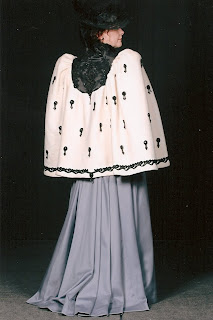 Here is the suit without the cape, there is almost 8m of fine Italian wool fabric in that suit, a good deal of it in the back skirt 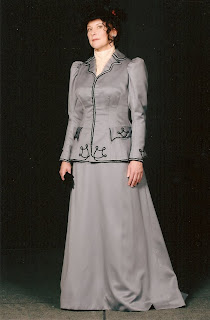 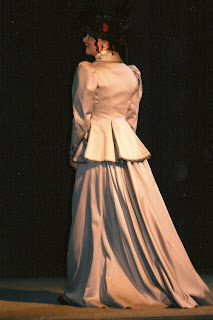 And in order to give the audience something more exciting to look at than a model in a costume walking up & down & up & down ... and so my model wouldn't get too nervous ... and so that people would see something of all the undergarments - I made myself a "Lady's Maid" outfit and did a bit of ham acting ... here I am flouncing m'Lady's petticoats. 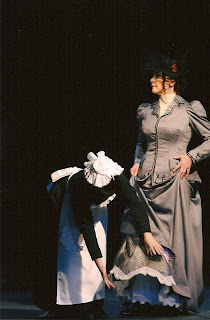 There were 10 pieces to the costume - in order of dressing ... first the Drawers (though actually my model refused to wear these!) Yes they are authent

ic and they are split ... but before you start sniggering remember that elastic was in its infancy in 1891 and the drawers had to go under a corset that came down past the hips. 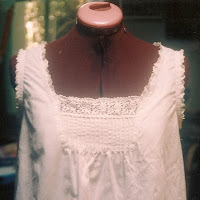 me Museum in England :-) and it is the only part of the costume that does not live in a box - I wear it as a summer frock. The Chemise was an important garment - going next to the skin, under the corset and keeping that impossible to launder item relatively clean.

After the chemise came the Cotton Petticoat - here needing an iron. I had to exercise so

me restraint with the

petticoats - the early 1890s was when underthings started to become pretty and they became more flounced, be-laced and be-ribbonned over the following decades. Here are some of the laces and panels of tucking I used -

Over those things came the Corset ... 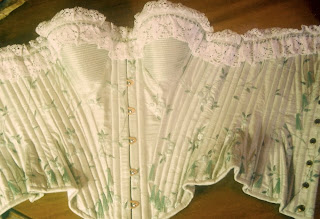 the silk fabric came with the rose-bud embroidery but I did the "flossing" at the end of the boning channels - there are corded bust gussets, hip gussets, a mix of steel and plastic bones ... lots of work!

Next the Taffeta Petticoat - a self-striped fabric and I had lots of fun matching the stripes in 'Vs' on all those godets !

And that was just the underwear - mind you the next garment ain't exactly outer-wear ... the Dickie Front or Ch 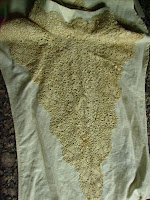 emisette. A false blouse, it has no sides or sleeves.

I'll post lots of pics of the vintage Maltese Lace piece which I bought at auction - originally it would 've been meant as a bodice front, it is shaped to go round the back and has a stand collar. I had to mend it and there was a nasty stain (still there but much fainter, it smelt strongly of gravy when I washed it!) 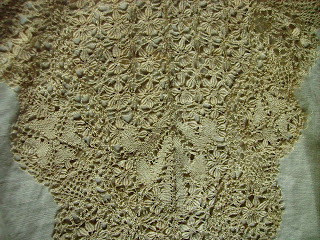 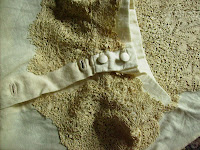 that's the back neck, I dyed the linen fabric with tea, also the silk used to cover the buttons and the button-holes are by machine with hand-stitches over the top (faked authenticity - no zig-zig sewing machines in 1891). Looking at it now I think I might have mounted the lace with the wrong side facing out - at the time I chose what would 'read' the best under lights.


Well, you've seen the suit and the cape - there was also a HAT - which could not be seen at the ShowCase because the background was also black!

Here it is on a wig-stand - it ended up quite Gibson Girl. 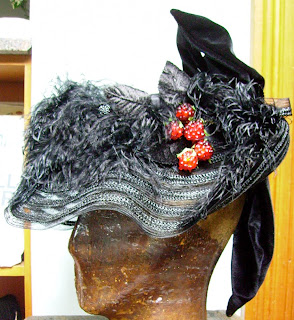 I loved researching for all the bits of the costume - the original description on the Sandoz illustration (btw: it is from the Dover publication "Victorian Fashions & Costumes from Harper's Bazar: 1867 - 1898" ed. Stella Blum) said "The hat, from the Maison Virot, is of transparent black horse-hair popularly known here as Neapolitan braid."
Well, we use "crin" in millinery, mostly as a trim - it is made of nylon but was it originally made of horsehair? After all crin = horsehair (crinoline originally meant fabric made of horse-hair & linen ... like tailor's hair canvas I guess). I researched as much as possible but I still didn't know if a hat made of horse-hair would look much like a hat of modern nylon 'crin'. But at the end of 2005 we went on our 1st ever OS holiday and I managed to arrange a Study Day at the Bath Costume Museum ... in the course of all the emailing to arrange it, I had mentioned that I was trying to find out about horse-hair hats and the lass looking after me at the museum gave me a lovely surprise ... they had a late Victorian hat made of horse-hair and straw braid ... EXACTLY like some hat braid I had at home, only mine was nylon ... That's it stitched together to make the brim - the crown is leeno foundation covered with satin, not that you can see it under all the ostrich plumes!
Posted by Lillian & Audrey at 16:09 No comments:

I Scream, You Scream, We all Scream for Ice Cream

Nothing quite like a really ancient joke! I finished these at the end of January but better late than never? 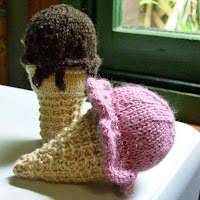 Another letter in the ongoing Alphabet Project - I was stuck for something appropriate for the letter I, most of the alphabet will be animals - Ibis (too hard) Iguana (too similar to Gecko and Lizard) ... Then I came across a wonderful pattern for Ice Cream Cones or if you are on Ravelry the pattern is called Scooped. 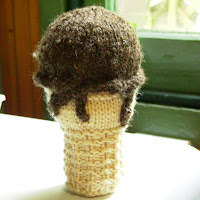 Choc is my grandson’s favourite :-) that is a natural un-dyed wool - I mo 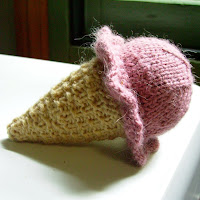 Remember those fabulous lime green 'jelly' gumboots I bought for my Blythe doll? Well, I've made the outfit to go with them ... Hardly the weather here for velvet overcoats and bonnets, luckily Lillian does not perspire (she doesn't even 'glow' !) 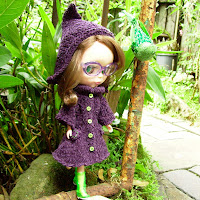 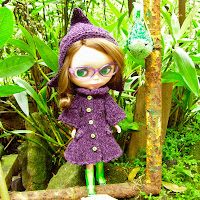 We are having fantasies that Lillian is to star in a movie about a Pixie who works as a librarian, she befriends a magic green bird and they have many adventures in a rain-forest ... 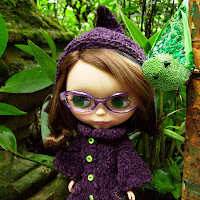 Cheap chenille yarn, buttons with nail polish 'enamel', pocket flaps and 1/2 belt at the back have lime green top-stitching. 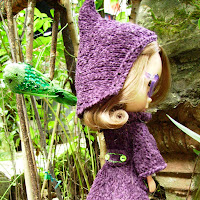 Patterns are the Basic Top Down Raglan Sweater, highly modified - the Pixie bonnet is modified from the Blythe Pixie Hat (it is on Ravelry, not sure how to reach it without going through Rav).
Posted by Lillian & Audrey at 10:16 2 comments:

A couple of posts ago I was talking about some yarn I had hand dyed to a soft aqua ... well I've started knitting it up. 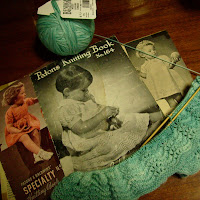 The plan is to mix the bands of wave stitch and puff sleeves from “Joy” with the maths and sizing from “Barbara” which is for 4ply (as is my yarn) and the bodice styling from “Nancy” - not sure if I’ll make a collar or not.

The slight variegation in the yarn is knitting up quite pretty and it seems appropriate to knit wave stitch in an aqua colour.

Lace is my current obsession - I'm determined to learn how to make bobbin lace this year and have joined on lovely on-line group of lace-makers. And now for a tale of "inspiration" or the torturous path of creativity ...

Last Saturday I was getting my hairs done again and one of the young hairdressers was wearing a lovely vintage crochet singlet top - it got me thinking. Then a member of the lace group posted a photo of a multi-coloured lace shawl and as I tried to work out how that shawl was made, I realised that I knew some methods to stitch together a miscellany of lace pieces. Now I've collected small bits of lace for several decades - left-overs from sewing projects, bits un-picked from vintage garments, pieces rescued from the scrape bins in costume workrooms ... the result is yet another of those stashes that sometimes threaten to over-whelm me.

SO - I got out an old pattern for a singlet / camisole top and poured out the bag a lace bits ... a bit of sorting out into colours ... 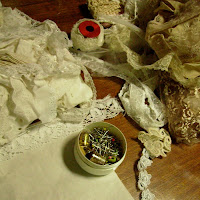 then a whole day spent pinning and sewing and Voila ! 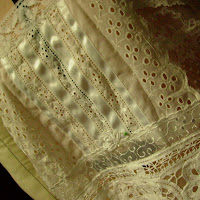 yeah well I feel it is a Voila moment. That's the front with a lot of Broiderie Anglaise and ribbon. It is not finished yet, the boring tidying up at the back is yet to happen and it needs straps but I am very pleased with the result of all that work. A pretty little top (hopefully sellable in my Etsy shop) from a pile of lace bits. Now to start on that pile of cream and ecru coloured pieces ...
Posted by Lillian & Audrey at 12:38 No comments:

I've been having fun with the dye-pot again.

This will (eventually) become a knitted dress for my granddaughter - Bendigo Woollen Mills' "Luxury 4ply" in a rather dilute mix of Sandolan "blue 3G Turquiose" and a little bit of Landscapes' "Kelp". 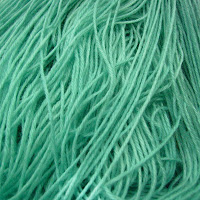 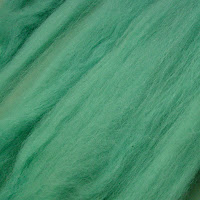 Now, what to make from that ... spin it lace-weight and make a shawl ??


Well, the rest of the Sliver was sitting there looking very white so I made a start on an idea I've had for a while - to spin yarn that looks like the water of Sydney Harbour. I was sitting on a wharf, eating my lunch on a bright sun-shiny day, looking into the water trying to see the fish and I kept thinking of these lovely lines in Kenneth Slessor's wonderful poem "Five Bells"

"Deep and dissolving verticals of light
Ferry the falls of Moonshine down. Five bells"

only, being the middle of the day it was sun-shine that was being ferried down ... "deep and dissolving verticals of light" ... Wonderful words.

Well, I'm envisaging the finished yarn as a tweedy variegated - mostly a dark blue green with this as the "light" 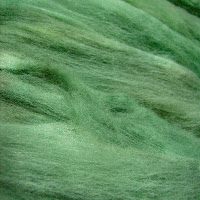 It is actually a little more intense than the photo shows - it is Landscapes "Kelp" with a sprinkle of Sandolan Brown.
Posted by Lillian & Audrey at 09:26 No comments: