Goodness Gracious - My hat was on ETSY's Front Page

My "Flapper Girl Cloche" hat was on Etsy's Front Page - this is a copy, my hat is in the middle of the lowest row.

A complete surprise - I didn't even get a notification that it was in the treasury!
Posted by Lillian & Audrey at 16:58 No comments:

YEA - we're off interstate tomorrow visiting our daughter and grandchildren :-) :-) :-)

So I've been frantically trying to finish some of the things I've been making for them ... granddau 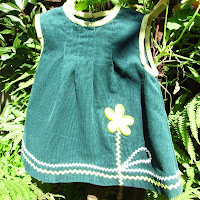 ghter is 9mths now and she is getting a couple of dresses - green cotton cord. with ric-rac and yellow gingham binds and daisy (a bit bleached out in photo) 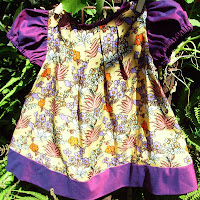 there is a matching 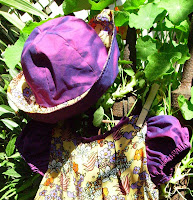 This knitted cross-over cardi has turned out rather large though I had the correct guage - oh well, as we are approaching summer this is probably just as well - it should fit by autumn! 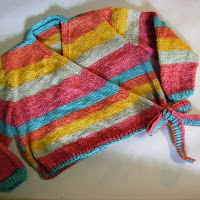 The possum is just the right size :-) 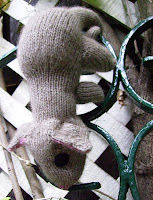 I used yarn made of possum fur - which is a bit spooky I suppose but also very realistic! (it is lovely and made by Touch Yarns of New Zealand, where possums are feral pests) Because the grands are very young I've not used buttons for the eyes as suggested by the pattern (Cleckheaton's "Wildlife in 8ply" - very clever patterns by Barbara Lennon) nor have I used those "safety eyes" meant for toy-making as I don't think they are safe at all - they break very easily. SO - I used black felt but perhaps they are a little too large and rounded as this possum looks like it has a thyroid problem! 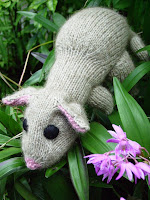 I've made more felt play food for grandson - guess it is never too early to learn how to be a wonderful Barista like his mummy :-) I've slightly adapted some of umecrafts lovely patterns to make felt 'cups' with inter-changeable 'beverages'. 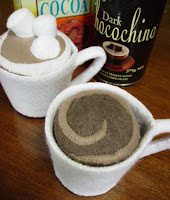 Have made 3 main bevs - Hot Choc, Coffee and Tea - then lots of extra 'tops' for the different variations.
Here is "Hot Choc" in the front and "Choc with MarshMellows" at the back - (not sure about those marshmellows!)

Here we have the coffees - from the left - Cappuccino, Latte (a 'top' sitting on the table), Flat White, then the other photo - Long Black (the main coffee base, don't you love the 'crema'?) and Mocha

And here is the whole lot - up-side down because I've stitched what they are ... 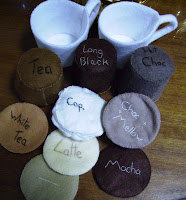 And finally - something for my daughter's Blythe Doll (well, she is almost another granddaughter!) It is being modeled by my Blythe Doll, Lillian.
Posted by Lillian & Audrey at 15:55 No comments:

A Plaid Pudding and Petal Power

Work commitments have meant that I've missed even more of the Cert 4 Millinery Class but I'm back to it again and trying to do a bit of catch up - the current exercise is on "Fabric Covered Foundations". That's millinery talk for the most time consuming hats! The 1st one had to be a pill-box and I've made this plump pudding of a hat to match one of my favourite suits - 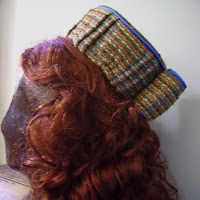 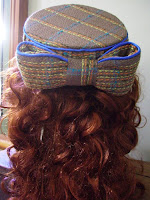 The suit is in the same plaid fabric and is from a vintage pattern - very early 60s and very Jackie Kennedy! I love the colours and crazy one-way check but the fabric is acrylic which made things difficult - a wool fabric would've been much easier!

The 2nd hat has to have a straw brim, a fabric covered crown and fabric trims - and I must have a bad dose of Spring Fever because can't think of anything I'd rather make than a hat with petals all over.

Being crazy I'm making the peta 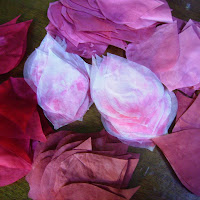 ls myself - and I don't really know how to make silk flowers but I had great fun.

Because the traditional stiff 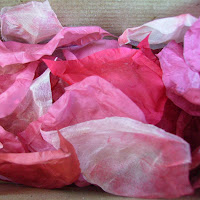 eners are nasty petrochemicals I stiffened the silk fabrics with PVA glue which made the fabric quite paper-like - the white organza petals are painted. Then I 'tooled' and shaped them using the traditional brass silk-flower making tools.
Posted by Lillian & Audrey at 22:03 No comments:

Native Orchids and a Witch

Well I didn't really Make these but our garden is really lovely at the moment with everything in bloom - the smell is a blend of jasmine, wisteria and Dendrobium speciosum (Sydney Rock Lily or King Orchid) - 2 big plumes of flower this year. 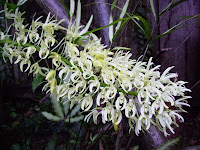 Also all the Dendrobium kingianum (Pink Rock Orchid) are out (some of these are crosses with D. falcorostrum (Beech Orchid) 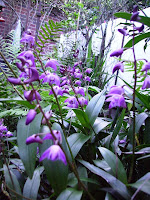 I'm trying to de-stash my life a little - have been putting lots of hats up for sale on my Etsy shop and today I listed my Witch's costume. Had great fun modeling it for the photos. 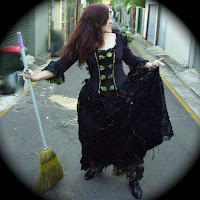