Upcycling : or How an Angel was Made

Before I get to the angel I'd like to talk about a little 'gleaning'*
I don't know whether to be grateful that someone threw this lovely vintage wool blanket out in a pile of rubbish or to be appalled that someone could simply throw out a wool blanket. 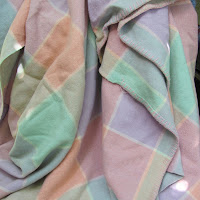 A good wool blanket for heavens sake!
Have they never been cold?

I'm grateful I found it before a dog lifted its leg on the pile of rubbish! 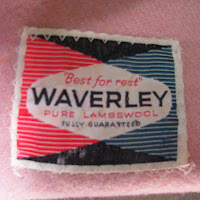 Nought wrong with the blanket except for a short section of hem coming undone ...

I gave it a good wash and hung it out in the sun-shine for a few days to kill any germs.

Thank you very much, whoever you are, for the free vintage wool blanket in great condition.  But next time perhaps you should give your unwanted blankets to an Op Shop - if I hadn't gone past and spotted it, this lovely blanket might have ended up in land-fill!   and what a waste that would've been!


And now for the Angel:

We haven't done a proper Christmas tree for years and this year I decided that I wanted a nice tree - the tree I'd planned decades ago as a child.  A white tree with blue decorations.

Finding a small white tree was really difficult.  Getting blue baubles was easy.  Then for the topper - I like an angel for the top of my tree but I just couldn't find one - plenty of star toppers but no angels!

It looked like I would have to make my own ...

Angel toppers often have a body / dress that is basically a cone (because that's where the top of the tree goes ... oooops!) and I had a couple of cardboard cones (they had string on them - the string that I used to knit the Zebra costumes for The Lion King ... but that's another story)

Even Angels need heads ... and it just so happens that I had a spare doll head (left over from Lillian's body transplant) 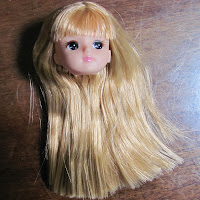 I knew there was a good reason for keeping that Licca doll head! 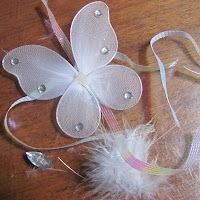 Angels also have wings - and I could've made some nice wings like these here  but I really don't have the time so close to Christmas (the season of good will and no time to sneeze) so this is the only part of the angel that I bought.  A child's cheap dress-up set, fairy wings, head-band with boppers and a magic wand (my granddaughter will love the wings and head-band) the butterfly on the magic wand had wings of about the right size ... the wand stick was the only part I didn't use.  I added more sparkle to the wings with glitter glue. 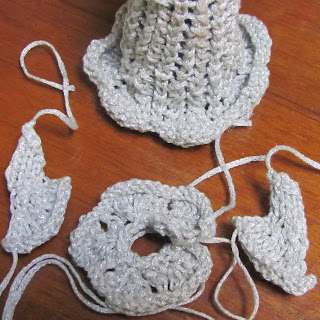 Now for the Angel's dress - which I knitted.  Stash yarn (bought unbanded - a tape yarn approx 8ply (or DK) with a metallic thread through it).  Used a lace stitch for most of it because I wanted to see some of the blue painted cone underneath.

That is the bottom part of the dress over the cone (the lace stitch gave a nice wavy edge) the sleeves and collar.  The collar is needed because this angel is going to have no neck. 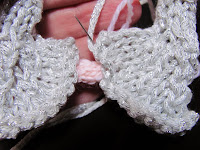 She could do without a neck but I thought she should have 'hands' - a little bit of Icord worked in baby pink yarn and stitched in place between the sleeves. 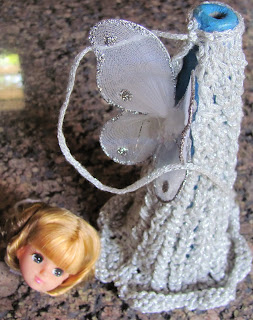 Worked the dress in the round only as far as the wings would go ... here it is on the cone - the glitter-glued wings have been hot-glued to the cone.

And there is the doll head -

I've given her a romantic sort of up-do hair-style.  Her long hair would've hidden the wings! 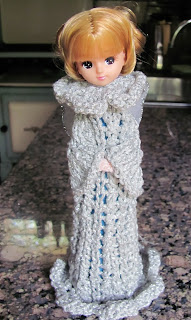 Progressing - I managed to hot-glue her head with a sweet little tilt, the collar effectively hides her lack of neck, I've stitched the sleeves on with the edges turned in so they sit out a little and look a little like there might be arms inside.

The hair is very messy at the back but that is OK because she will have a halo.
A bit of circular knitting - here it is being 'blocked' 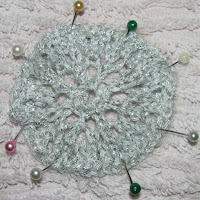 and in situ - hot-glued in place.
And I've added all the frou-frou from the magic wand to the centre of the wings 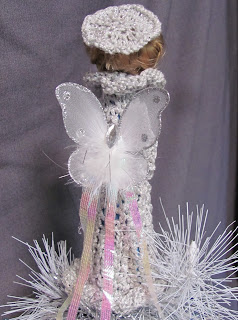 Angel from the front - 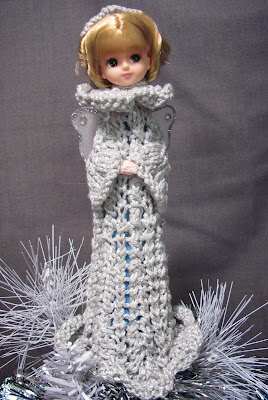 And on the tree - she is perhaps a bit tall for this tree but I think she'll do - and all re-purposed / up-cycled apart from her wings! 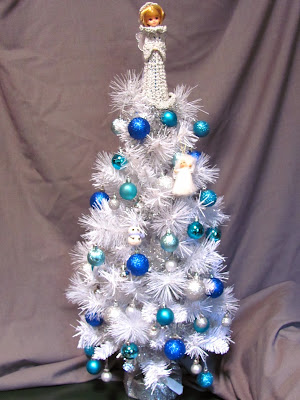 
*  the reference is to the film "The Gleaners and I" directed by Agnès Varda
Posted by Lillian & Audrey at 16:07 No comments:

Before & After : a bit of furniture restored

We 'gleaned' *  this groovy & very sturdy old stool from our back lane several years ago - gave it new rubber 'feet' and it has served very well ... until at long last the burnt orange vinyl started to split - 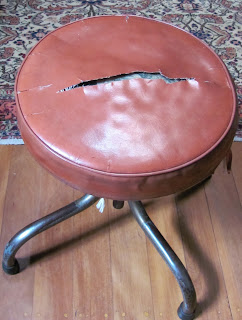 So I got out my bag of upholstery fabric scraps - did a bit of patch-work - replicated the original corded edge and made more of a feature of it by using thick cord and contrasting fabric ... 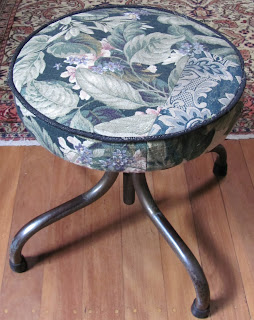 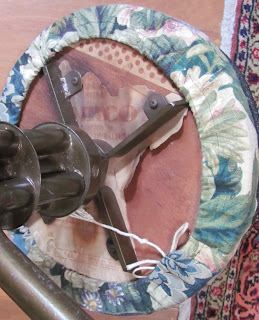 It is nice again - here is the underside - the new fabric cover, like the original vinyl, simply ties on.  This means that it will be washable - bonus.


Feeling quite virtuous about this little example of "fix it don't dump it" and I'm sitting on the renewed stool right now as I type this post :-)
*  the reference is to the film "The Gleaners and I" directed by Agnès Varda
Posted by Lillian & Audrey at 17:11 1 comment:

The teasers from the previous post - are all finished and listed on my BlytheStar Etsy shop. 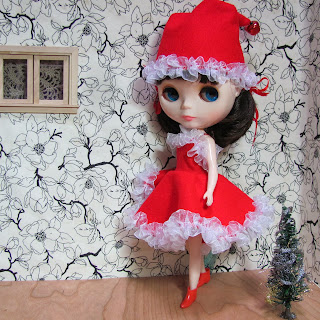 The felt fabric makes the circle+ skirts sit out really cutely and the organza ribbon trim has a nice little twinkle ... my girls had heaps of fun modelling these outfits

Following the success of last year's Christmas Gnome hat (it sold within a few days!) I thought I might start a tradition and knit one every year ... here is the 2013 edition 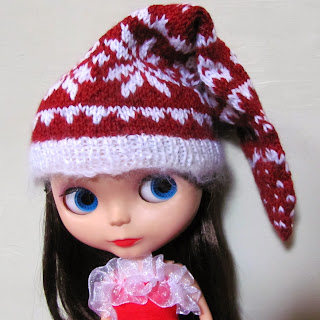 A darker red this year and a little mohair at the head band for that cozy softness - the fair-isle or jacquard patterns include my favourite snowflakes, some delicate daisy flowers and sweet love-hearts.

My Gnome hats are really long and can be worn flopping over or standing straight up in the air! 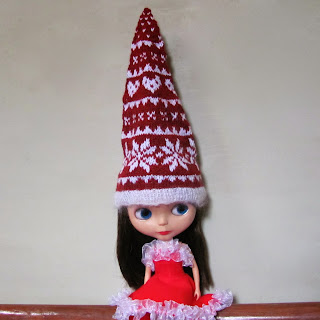 And I'll leave you with another photo of my darling dollies in those Christmas costumes ... 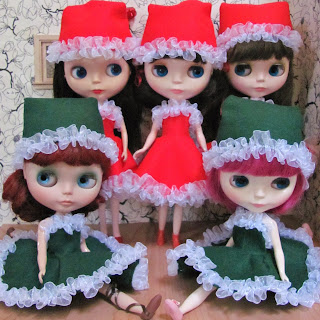 The count-down to Christmas has started !!!