I was trying to calculate the amount I've knitted since Christmas - and I've managed to scare myself!

I seem to have knitted over 13,500 metres of yarn since Christmas !

Most of that knitting was for the stage and so I was developing the patterns as I went. Still have a couple of items to make with deadlines that are galloping to meet me - so click clicketty click ...
Posted by Lillian & Audrey at 09:48 No comments:

First there was a fad for 'distressed' furniture - and when we renovated our kitchen the cabinet-maker was convinced that I would want cupboards made of new timber specially bashed about to make it look old & recycled (ridiculous - I told him that I did NOT want distressed cupboards or a stove on the verge of a mental breakdown and if anything was going to be distressed in my kitchen it would be me !) ... Then we had 'distressed' jeans and I sincerely hope that fad is on the decline. But best not get me started on that soap-box because really, I wanted to talk about Distressed Knitting. 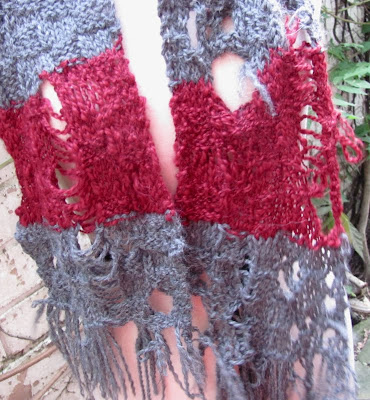 Because, I've been doing a lot of it lately - costume for stage productions. Many costumes get 'broken down' - when a character is poor, or is in the middle of a big adventure / war / is fleeing from a monster ... it would be rather strange if they looked like a fashion plate in beautiful, brand new clothes. When a costume is sewn specifically for a production it is made beautifully and then handed to the 'art finisher' who, depending on the look desired, sprays or paints dye into it (for sweat, blood, dirt ...) chops into it with scissors & things, scruffs if up with graters, wire brushes etc etc ... all of which sometimes causes the costume makers to join the costumes in being distressed! 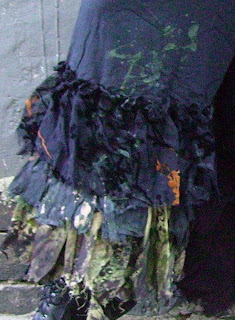 With hand-knitting some dyeing processes are OK but you cannot chop into knitting or attack it with wire brushes - unless you go to a lot of trouble stitching around the area first ... which is done, mostly with shop-bought machine knitted garments, but it is not really satisfactory and is rather obvious - at least to all the knitters in the audience :-)

So, when a costume designer wants hand-knitting to look old and tatty it is done as the item is knitted. Sounds easy enough but you need the garments to be stable - those holes & ladders should be the same for the 101st performance as they were on opening night - and the tattyness should be visible to people sitting up the back.

The first piece of Distressed Knitting I made was a shawl for the Bird Lady in Mary Poppins the musical - soon to open in Sydney (I blogged about the shawl here) and here is Debra Byrne wearing it.

The designer wanted that shawl to resemble one made from machine knit fabric that had been extremely laddered.

The more recent Distressed Knits are all for Opera Australia's new production of La Boheme - designs by the wonderful Julie Lynch (BTW if you go to "folio" there you'll see, amongst all those fabulous costumes, some other knittings that I've made for the stage - in 'Little Women' including the red & black bonnet :-) and the black & silver cardigan in 'Mary Stuart') The major characters in La Bo are impoverished artists and students and this new production is set in 1930's Berlin.

As this post is getting quite lengthy I'll just talk about the scarves and keep the other knittings for part 2. I've knitted 7 scarves, all bar one (for the LandLord so he has money!) have varying degrees of Distress. These are not very distressed - merely sobbing gently in the corner - 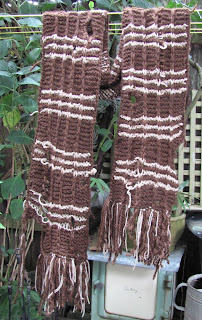 a wide scarf - more about the stripes and slipped stitch rib pattern than the tattyness. Those colours make me think of chocolate cake with cream :-> 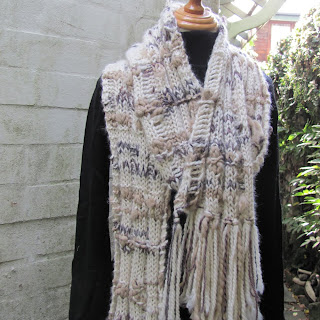 This one is long - and mostly about the contrast 'splodges' which make it look dirty & stained.

These 2 are on medication ... (but aren't the colours fabulous - the yarns were chosen by Julie Lynch. The red is for an artist, the other is for the Plum Seller - perfect colours!) 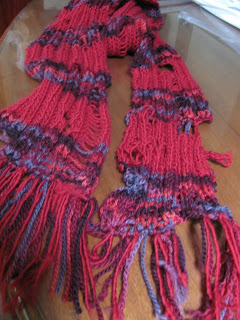 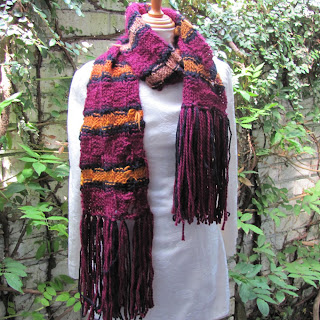 And these are for street urchins and they are extremely distressed, poor things. 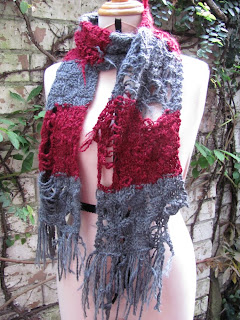 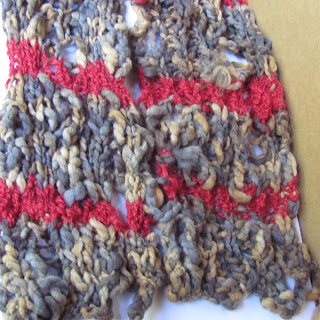 Well, that last one didn't get many holes etc - the mottled thick&thin yarn looked like it was in a bad way all by itself and my added tattyness was mostly wasted.

Now a scarf is merely an accessory - hard for me (as the knitter of them) to keep that perspective but the performers will be wearing more than just the scarves (I hope!) However, as all scarf wearers know, a scarf can say a lot and of course I wanted to do the best job possible and deliver what Julie Lynch required ... SO quite a lot of thought & planning went into those apparently simple bits of knitting:
And lastly there is the visibility factor. A scarf is worn wound about the neck so it is pointless putting tattyness in the mid-section where it won't be seen - keep the work near the ends where the scarf might spread out across (hopefully) something in a contrast colour :-) Make the tattyness a bit 'larger-than-life' so the folks in rows X, Y & Z will see it. And make it real - a very contrived and theatrical "real" but let's think about it:
Well, one can get extremely philosophical on the subject. Indeed, philosophising about strange things is a known side-effect of spending many hours hand-knitting. But in summary - there is more to Distressed Knitting than just dropping a few stitches. More in Part 2 folks :-)
Posted by Lillian & Audrey at 09:52 1 comment:

A Moth of Letters

Yesterday this very learned and well-read insect paid us a visit. 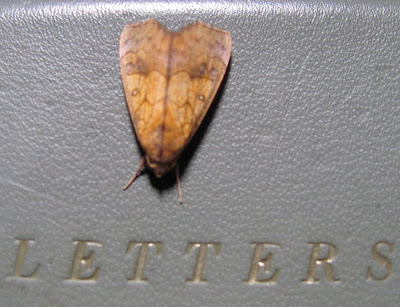 I have no idea what her proper Latin name is but I'm sure it starts with Prof. She certainly has a lovely funny moth-face with fine and elegant antennea. Quite small - about 1.8cm long. 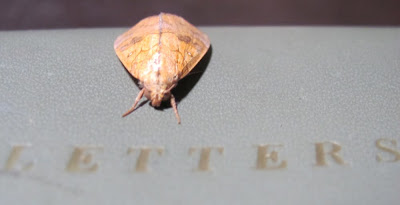 After the photo session I took Prof. Moth out to the garden and encouraged her onto some wood which was more suited to her lovely camouflage outfit than our vintage letter-holder.
Posted by Lillian & Audrey at 09:38 2 comments: