The Smallest Room of the Dolls' House is Finished 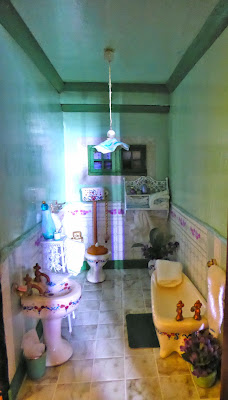 My cabinet dolls' house has been an on-going project for nearly 30yrs and this is the first room that I am declaring - Finished - Done - Complete.  It is the smallest room.


The dolls' house was started for my daughter but she quickly dis-owned it and over the years, many things that we could not afford in the renovations of our actual house (or that were simply too grandiose) I did in the mini house.

Victorian era prettily painted bathroom fittings were one of those things - indeed in the full-scale house there isn't even enough space to have a bathtub!  But the bathroom set was one of the first things I bought for the dolls' house... I painted all the flowers on about 12yrs ago 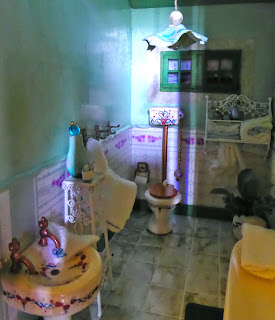 The doll's house bathroom has marble tiled floor, fancy tiles (I painted those flowers too!) and a view of Pont Alexandre III  out the window.  Well, every house should have a view of a Parisian bridge from the bathroom window!!

Some things I made myself.  The light-fitting is Fimo, towels & face cloth sewn from a stretch toweling baby onesie, lots of beads... 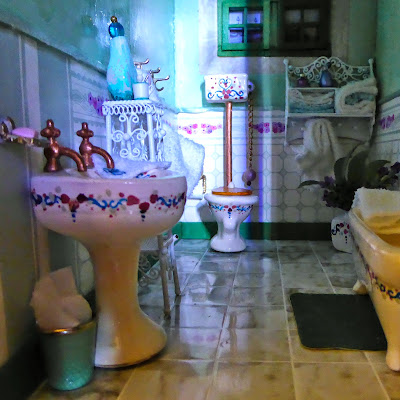 Enjoying a sense of closure here - just so long as I don't think about the other 8 rooms!
Posted by Lillian & Audrey at 15:03 1 comment:

A Sewing Space of My Own Again

We spent the first few weeks of this year sorting, de-stashing, rearranging and I once again have a sewing / creating space ...

It is cozy rather than spacious but I've natural light and access to all my machines and a little ironing space / cutting table ...  Also ... I can now find things again.

So far I've made 6yr old grand-daughter a Sun-dress

Had fun with the 2 sizes of this print and the pale green really suits my GD.

However, I was really glad I checked the bodice before I sewed it up - it would've nearly fitted me!  Added some tucks (had to remove 7cm - 2.8" in width)  then we went to All Buttons Great & Small (love that shop!) and got buttons to match the fabric.
The pattern looks recent though I found it 2nd hand - Simplicity 2994. 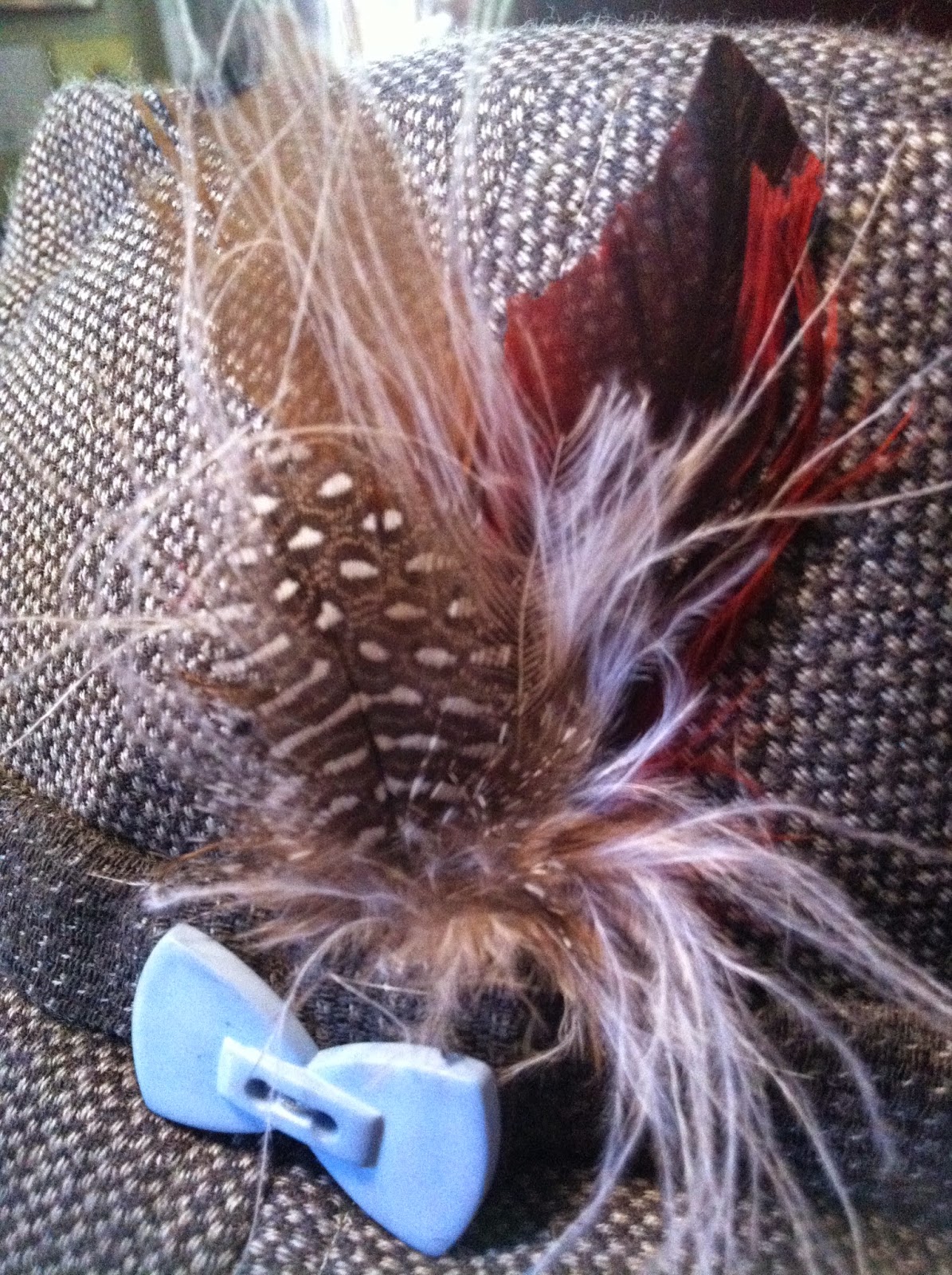 Grandson loves buttons too ... he really liked the bow-tie buttons and we decided one would look OK on the hat I made him last year (a fabric 'spy' hat or Humphrey Bogart hat) - especially if we also put some feathers there ...


Back home we got out the box of feathers and he chose this collection ... a partial red-dyed chicken feather, a tuft of white ostrich, a tan brown chicken feather that curves the wrong way and a spotty guinea fowl feather ....  I must say that all together they look really cool. 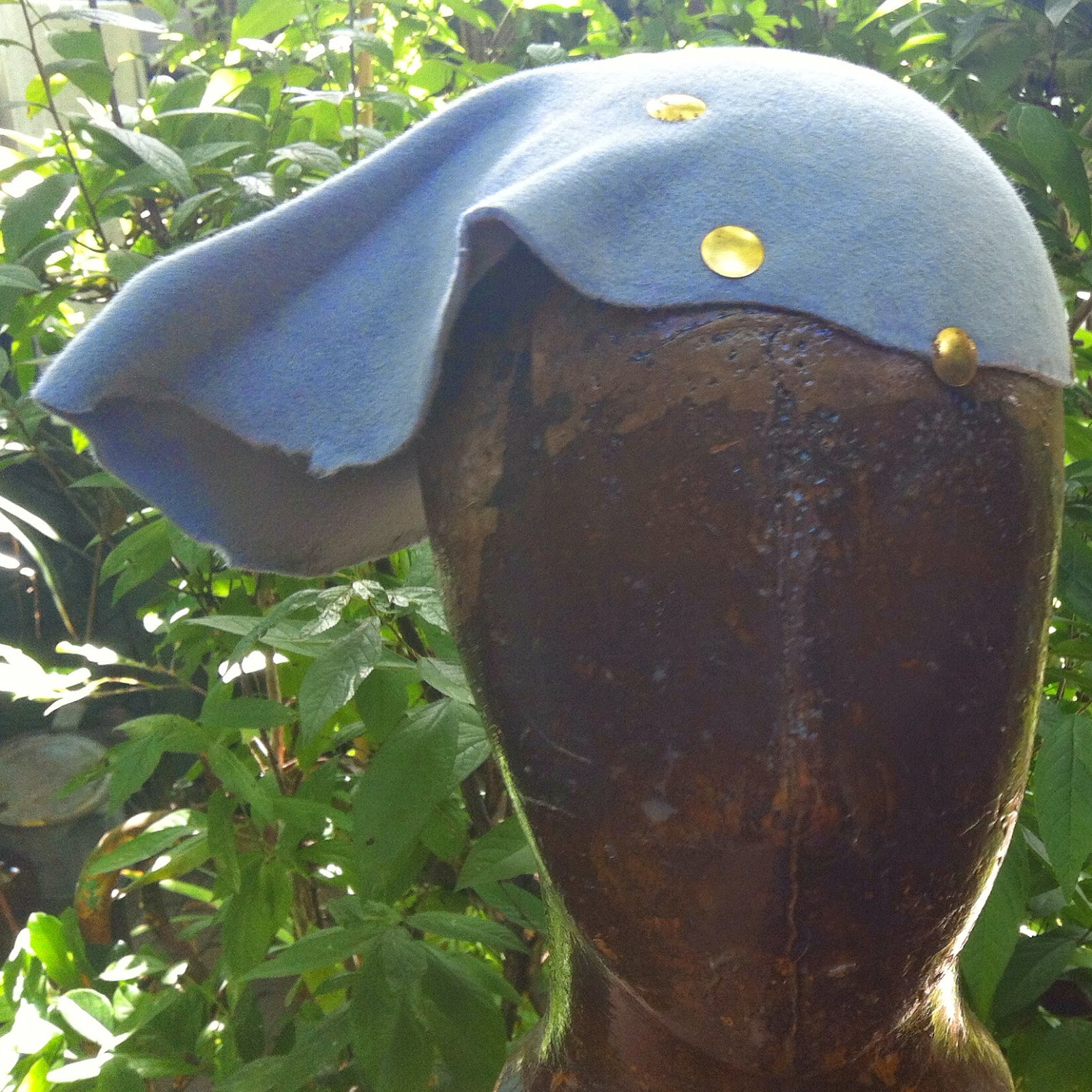 Well it isn't going to look like that - though I really like that wind-swept look.  I blocked that very old felt (a failed hat) it'll be the base / the foundation ... covered with fabric and lots of frou-frou. 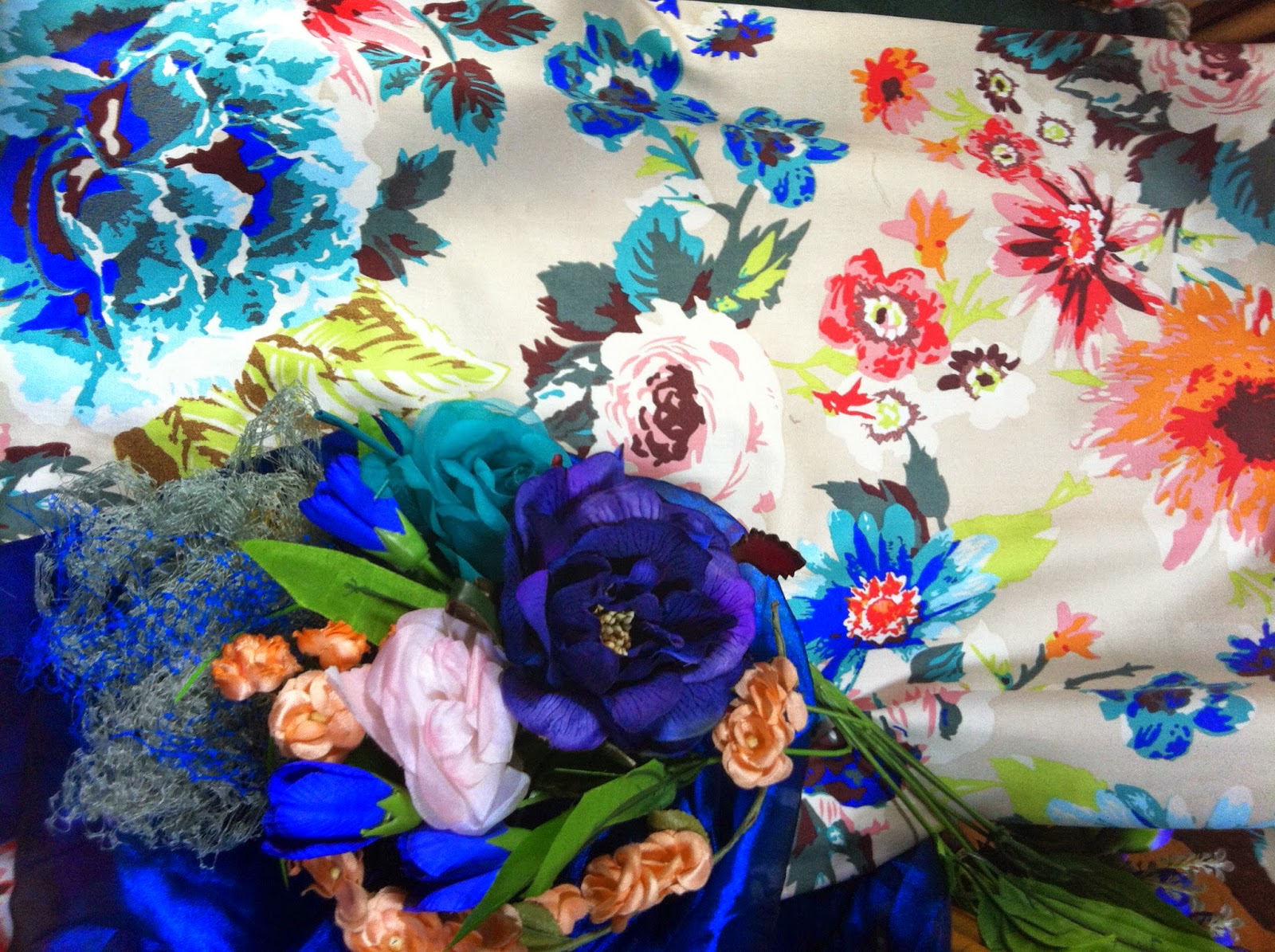 Now, this might be one of the cheapest hats ever - the felt & wire were an old millinery failure, the fabrics & veiling were 'gleaned' from the rubbish bins at Tafe, some of the flowers were gifted, some bought about 30yrs ago.  The only 'new-buy' for this hat was the blue bell shaped flowers ($2.50 for the bunch).

So happy to be able to make something from all the stash that I can now find with ease following the great big tidy-up.  And perhaps an advert for never throwing stuff out ???   though 30yrs maturation in stash could be seen as a little excessive.
Of course, when 'gleaning' from bins you find that trash sometimes needs a little TLC to restore to 'Treasure'. 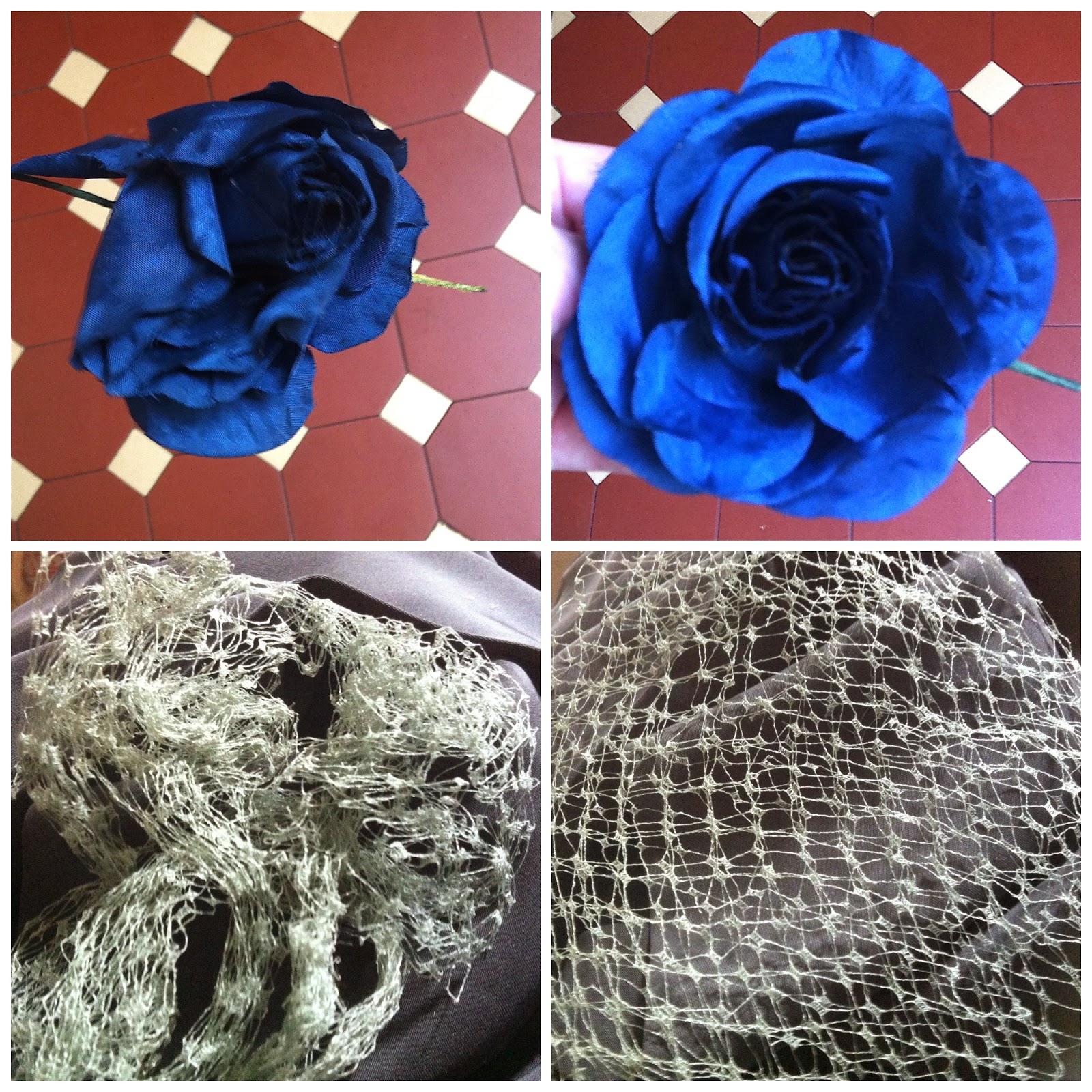 A bit of steam will restore a battered silk rose -

The finished hat (shown on an old 'head' shape that has no hair!) 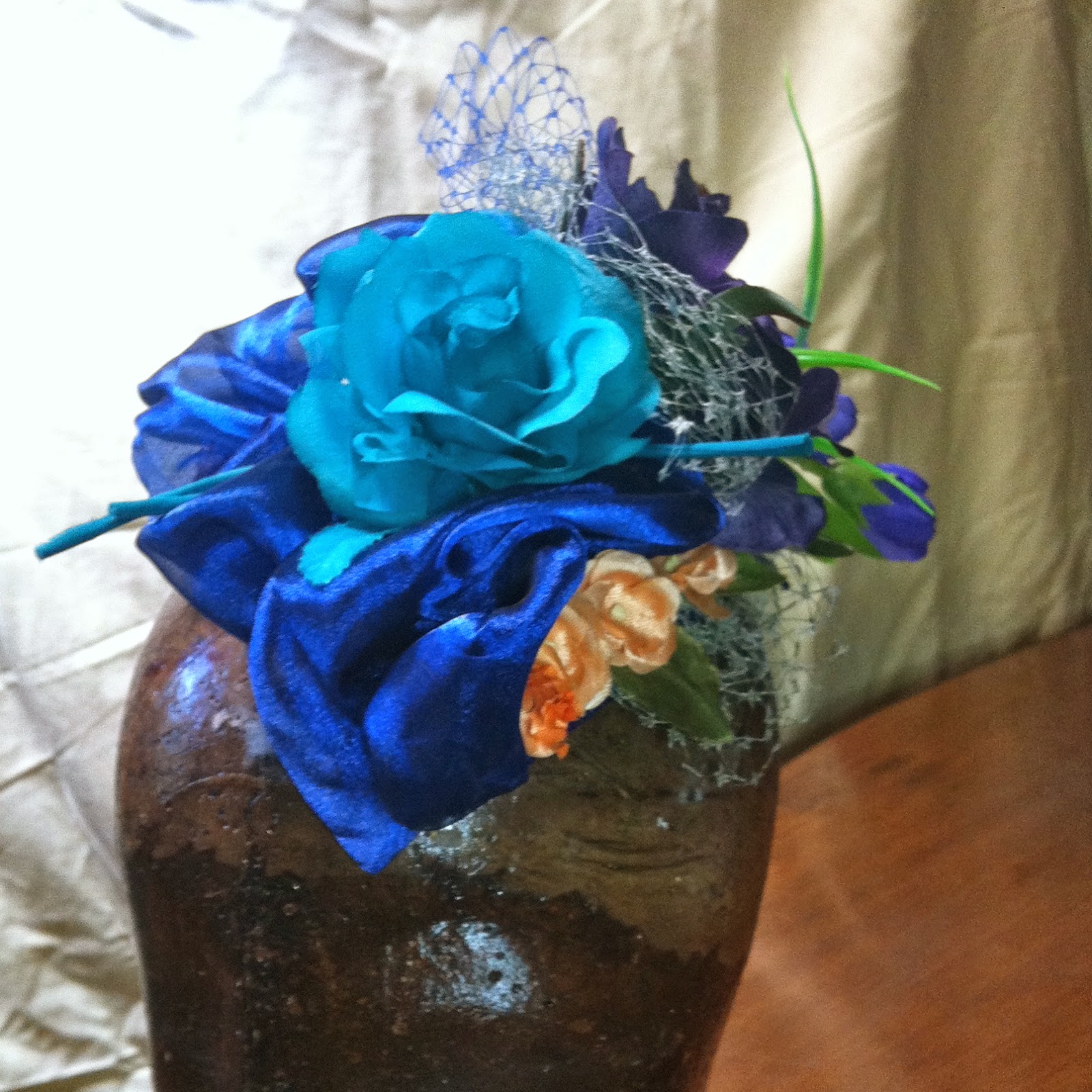 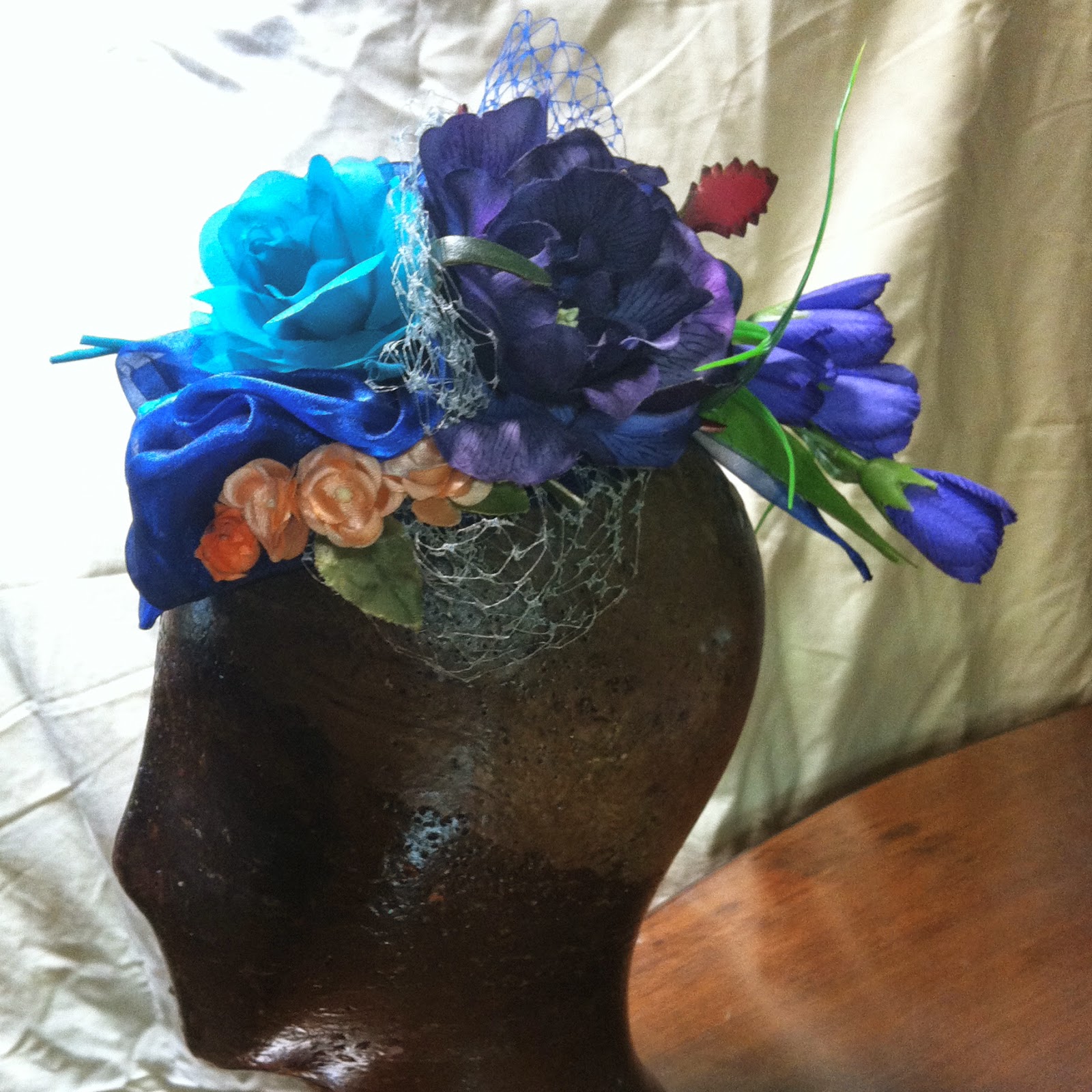