As promised - a second rave about Distressed Knitting, (see this post for the 1st part) this time focusing on the garments I've been knitting of late. Let's start with the largest one ... 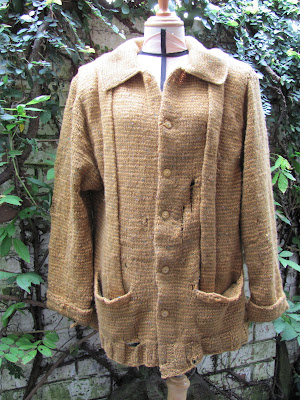 A cardigan / jacket for Colline in Opera Australia's new production of La Boheme. Colline is a philosopher and poor, he is also a Bass and David Parkin is to sing the role - David is very tall and strongly built so this is a large garment. Sorry, I was too lazy to set up Bruce, my male mannequin, so here the cardi is shown on Daphne with lots of shoulder padding - the cardi looks better on David. Well better in all its tatty and badly knitted glory!

Julie Lynch, the designer, gave me a reference photo from the 1930's showing a jacket with pleats (a bit like a Norfolk Jacket) - the sleeves were set-in quite strangely and the hem was badly stretched. She asked for pockets and we decided to put those pleats down the back as well. She needed the cardi to look old & worn out and also to look like it had been badly knitted. Julie had chosen 2 (rather ugly) mustard coloured yarns and wanted 1 row stripes of each (I threw in the occasional 2 row stripe for added Ooops).

For me the challenge is to produce a garment that is tatty looking & "badly knitted" but that still functions as a garment. Holes and ladders need to be stable and they need to be large so that the folks in the back rows can see them - they also need to be in logical places ... places where holes happen in much worn garments. I thought that a philosopher would do a lot of reading, writing and musing & I checked with David Parkin, he is right-handed, so I made a hole at the elbow in the left sleeve and made the right wrist very tatty 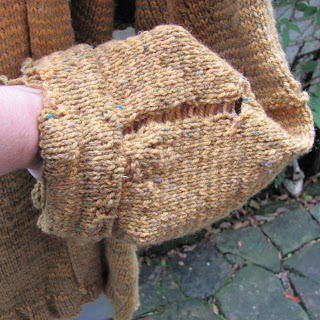 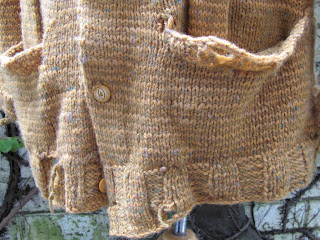 As for Badly Knitted ... well I've plenty of experience with knitting mistakes and where those are likely to happen ! Above you can see mis-matched fronts at the hem and here is a close-up showing mis-matched spacing between buttons & button-holes (totally contrived with short-rows). Holes & ladders down the front and you can see a pleat (they are giant Icords stitched down later). 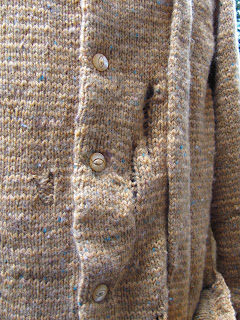 This garment was quite loosely knitted - on larger than optimum needles - and so keeping the fabric stable was a problem.

Next garments in size - 2 cardigans for child performers. Little 'street urchins' in La Boheme. Once again the brief was for worn out and badly knitted garments. This is for a boy, and wasn't to be too distressed (perhaps it is taking the medication!) 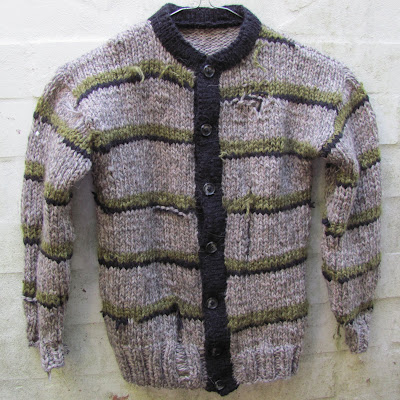 Don't you love the yarns Julie chose - kinda school uniform. The reference photo was a 1930's child's garment with dropped shoulders but tight about the armhole.

Most of the holes are on the fronts, elbows, wrists. 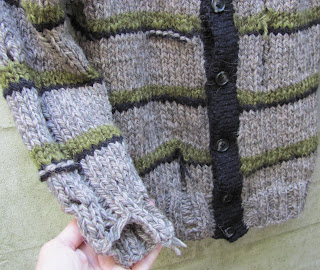 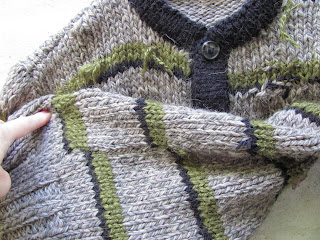 The 2nd child's cardi was to be in a far worse condition ... this poor thing needs to be hospitalised ! 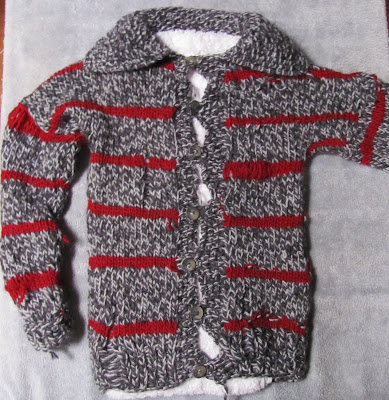 Here is the reference ... again those 1930's tight armholes, Julie asked for a similar collar (it was a very strange shape1) and those buttons & loops. 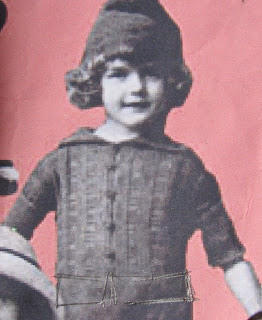 I had to make both these cardigans a little-bit-too-tight but we weren't able to have a fitting so I'm relying on the stretchiness of hand knitting and hoping that they are tight but not too tight! Hopefully the buttons & loops will pull as in the photo. Lots of bad knitting on display here, note the pulled-too-tight seam stitching! 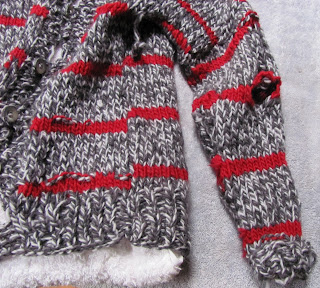 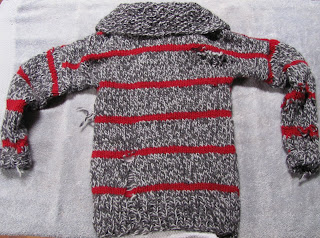 Details such as holes & ladders do get hidden with a tweed yarn - and most of my "distressing" was a little lost in the fingerless gloves, for MiMi and knitted in a tweed sock yarn. 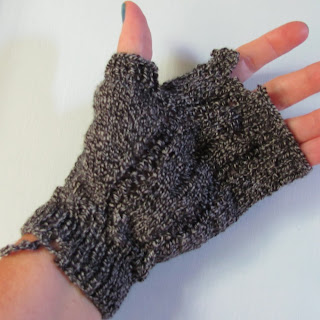 They are a tiny canvas for distressing and I guess that only the tattyness on the edges will be visible.

The last of the distressed garments for La Boheme was a beanie - also for Colline. Julie asked for Vertical Stripes so I used a technique many may recognise from old tea-cosy patterns :-) 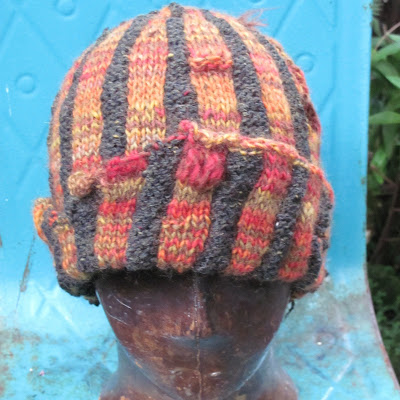 This had to be quite large (larger than Mary - my old papier mache head) as David Parkin will be wearing a wig for at least part of the time (and that wig is marvelous, so totally 'real' - the Opera Company's wig-makers are really wonderful). 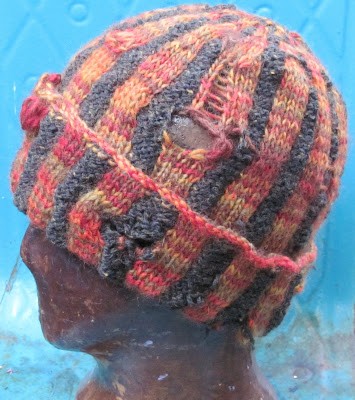 Now for the last Distressed Knitting - in that previous post I mentioned the shawl I knitted last year for he Bird Lady in Mary Poppins ... well, the designer liked that one so much that she asked for another :-)

The 1st was knitted in beige 3ply yarn and dyed grey later - this time they gave me 4 different beigey grey and grey yarns, 2 of them mohair. So I've knitted all the dirty splodges into the shawl along with the ladderings & holes. 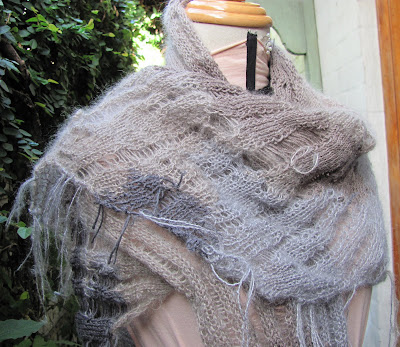 The Bird Lady in this production is very tatty indeed - a street person and as she is very friendly with the birds they have left their little messages all over her :-/ well that's the 'look'. I've been laughing that most knitters use colour-work techniques for pretty flowers, hearts, snowflakes ... I've been using those techniques to make 'Bird Poo'. 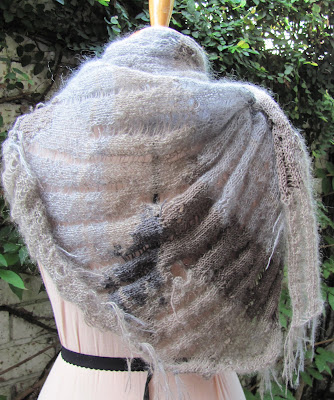 The mohair yarns make the shawl look rather elegant in a disgusting way but they knitted up very differently to the other 2 wool yarns - the mohair tends to stretch and it didn't roll between the ladderings despite my using the "Clapotis" technique (knit through back of loop before & after stitch/es to be dropped later) .... so the shawl developed a very lop-sided shape. Guess it all adds to the effect! 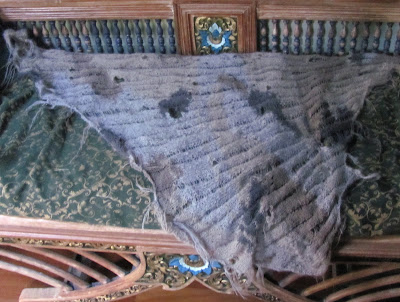